Rising above Canmore is Mount Lawrence Grassi. Nearby are two exquisite tarns known as Grassi Lakes. In town, his name graces a subdivision, a road, and even a school. So who was this Canmore icon? To find out I urge you to read Lawrence Grassi From Piedmont to the Rocky Mountains by Elio Costa, a professor emeritus in the Dept. of Languages and Linguistics at York University and Gabriele Scardellato, associate professor and the Mariano A, Elia Chair in Italian-Canadian Studies also at York. 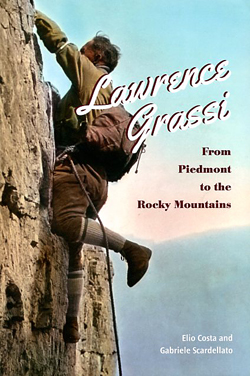 With credentials like these one can expect the authors to have done a thorough research job into his life and so they have,  travelling to Italy and Jackfish in Ontario to Field and then Canmore to dig out information. Unfortunately there was  scant information to be got about Lorenzo’s early years and the first two chapters mostly describe family life in Falmenta and the Italian migration of 1912 which Lawrence was a part of from Piedmont  to the north shore of Lake Superior.  It is only in chapter 3 when Lawrence moves west does his own unique story start to emerge.

Over here, Grassi  worked with the CPR in Field, then in 1918 moved to Canmore to work in the mines where no doubt he built up his prodigious strength. In his spare time he climbed mountains, sometimes solo. Many were first ascents like First Sister, and often went unrecorded. It is said he climbed his favorite mountain,  Mount Louis, an astonishing 32 times and made the first solo ascent of Mount Assiniboine during a 5 day walkabout. He guided at Alpine Club camps and refused payment for his services. He was an avid photographer, though, tellingly, few people appear in his photographs. To view his pictures visit the Whyte Museum in Banff.

To most people he is best known as a master trail builder. In K Country think Grassi Lakes trail.  In later years when he was assistant warden at Lake O’Hara he built the wonderful trail to Lake Oesa amongst many others, his trails “thoughtfully and carefully placed in the landscape.”

The authors describe him as “having a pathological shyness …a deep feeling of personal and cultural inadequacy that prevented him from feeling at ease in society.” Other words used are withdrawn, noncommunicative  and so on. To his climbing friends and clients he was down to earth, courageous, always  “doing something for the enjoyment and comfort of others. ” and for this he received many accolades in his later years.

Until near the end of his life he lived in a small cabin at the start of the trail to Grassi Spring and Grassi Lakes. And while the authors are admirable in keeping to facts and refusing to speculate on things like “why did he move west?” and “did he start climbing before he left Italy? ” they do a little bit of speculating of their own here in saying he was lonely living in his “ivy-clad cottage”by himself. I beg to differ, I bet he was quite happy living with his books and photos. He had good friends and people dropped in on him regularly to hear stories of his climbs even at the last when he was forced to move to the Bow River Retirement Lodge.

The book concludes with 94 pages of useful end matter. Published by the University of Toronto Press. Available at not too many places. Try Cafe Books, the museum in Canmore or the university bookstore in Calgary.

FREE copy of our HRT Guide

Next: What’s happening with Ribbon and Galatea Creek trails